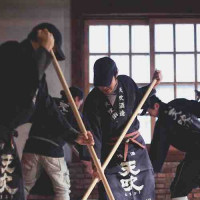 A flowery sake born in the beautiful Saga Plains

Amabuki brewery is located in Saga prefecture, in the southern part of Japan. The brewery is in the middle of the Saga Plains, surrounded by many rice fields, with a view of Mt. Sefuri in the north and Chikugo river in the south. Remains of a village from the Yayoi-era (5th century B.C.-3th century B.C.) show that rice cultivation has been going on for over 2,000 years in this area. The brewery has been producing sake since its foundation in 1688, using sake rice harvested in the rich Saga Plains and mild river-bed water from Mt. Sefuri area.

The Kinoshita brothers and flower yeast

Amabuki used to produce only futsu-shu (non-premium sake) to sell in the Saga prefecture and was not so well-known across the country. This long-established brewery is now run by the young Kinoshita brothers. The elder brother, Sotaro Kinoshita, became the 11th generation “kuramoto” and is responsible for marketing and sales, while the younger brother, Daisuke, is responsible for the sake production. They studied at Tokyo University of Agriculture where they came across flower yeast. About 80% of the sake produced in Japan is brewed with yeasts cultivated and distributed by the Brewing Society of Japan. Those Brewery Society yeasts are easy to use and allow a stable quality and production process. But an original yeast is a key to producing unique sakes. At the Flower Yeast Research Group in Tokyo University of Agriculture, the Kinoshita brothers tasted a ginjo sake brewed with flower yeast. The gorgeous ginjo aroma greatly impressed them. This was a defining moment for the brothers! After coming back to their brewery, at the beginning of 2000, they started to brew sake with flower yeasts while downsized the brewery from an industrial production to a handcraft one.

Although various data were provided by Tokyo University of Agriculture, brewing sake with flower yeast was a new challenge. “We never knew how the aroma and taste would turn out until we actually finished brewing a sake.” They brewed countless samples, adjusting the rice polishing ratio or changing the rice variety. As they continued to make flower yeast sake, they managed to bring out the individuality of each flower yeast by developing their characteristics. It took them three years to get a flower yeast sake ready for production. Although their new approach met a mixed reception at the beginning, Amabuki gradually came to be known in all of Japan for their flower yeasts. Only around 30 of the 1300 breweries in Japan dare to use flower yeasts for some of their sake, which makes it even more impressive when one considers that Amabuki is nowadays the only brewery that brews all their sake with this rare resource. Each flower yeast has its own distinctive character: Rhododendron has a wonderful floral and fruity flavour with a complex and round taste. Its acidity and rich umami go well with intense fine food like lobster or steak. While abelia used in Daiginjo expresses a long-lasting elegant ginjo aroma with a fine and crisp taste. Around 20 different flower yeasts are used for brewing by Amabuki. It is fascinating how each flower yeast can produce a unique, impressive and incomparable sake.

Spreading the beauty of flower yeast sakes to the world

Amabuki has changed from a local brewery in Saga prefecture to a well-known national pioneer of flower yeast sakes. Sotaro Kinoshita, the 11th kuramoto, is also keen to expand to overseas markets. He brings samples of their sakes in a suitcase to fly around the world, promoting their products and knowledge. “We want to be the brewery that makes people around the world discover the beauty of sake.” Combining traditional techniques and experience of their 300 years of history with the new flower yeasts, Amabuki continues to challenge the sake world.