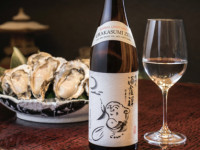 The URAKASUMI Brewery, the big sake name in northeast Japan, was founded in 1724 in the port city of Shiogama. It is still managed by the founding family Saura. The Miyagi Prefecture, in which URAKASUMI is located, was known early for its rice production. With its fresh, fine profile, URAKASUMI sake goes perfectly with the regional fish dishes, whose ingredients - tuna, anchovies, mackerel from the Sanriku coast - as well as the famous oats from Matsushima in the port of Shiogama are handled and in many sushi and seafood City restaurants are served.

Koichi Saura, the current Kuramoto (owner) of URAKASUMI, represents the 13th generation of the founding family. Today, the URAKASUMI brand is a modern classic and is known all over Japan and worldwide with its excellent quality.

URAKASUMI sake has the taste profile of the Nanbu-Toji school: clear and beautiful like melting water of snow. It is popular for its gentle aromas reminiscent of spring and its silky, mild taste. "We want to produce sake that is always enjoyed." says Saura. URAKASUMI "Misty Bay"  best communicates its philosophy and is considered a prime example of the Nanbu-Toji style.

Their longseller, URAKASUMI "Zen" Junmai Ginjo, was launched in 1973. The sake was epochal in this time characterized by "mass before quality". At that time, this high-quality sake was criticized by many sake lovers as "perfumed" and had a difficult start in the market. Polish down the best local rice down to 50% and hand wash in a small basket, ferment the mash at an extremely low temperature of 7-9 ° C ... there were many difficult and innovative processes that are now regarded as common practice for ginjo quality. Today URAKASUMI "Zen" is a modern classic and popular worldwide. The success story of this sake confirms that tradition is the sum of constant innovations.

Two toji legends and yeast No. 12

The success of the brewery in the post-war period is due to two generations of the Toji (master brewers) from the Hirano family. In 1952, URAKASUMI, led by Sagoro Hirano, won first prize in the Annual Japan Sake Award. His successor Juichi Hirano, who worked as a toji for more than sixty years, maintained the current production and fame of URAKASUMI. In the mid-1970s, URAKASUMI's cellar yeast was isolated by the Brewing Society of Japan (Jozo Kyokai) and sold as No. 12 Kyokai-Kobo (yeast) throughout Japan. It was a very proud event for the newly chosen Toji Brew Master. Nevertheless, Junichi Hirano remains humble: “Every year the rice and the general conditions are different. You cannot remake the same sake, even if the same conditions were created. Therefore, one should not consider brewing sake as routine, but start again and again like a beginner.” Even after his death in 2016, Master Hirano's thoughts are still internalized and practiced by his successors.

Sake culture export into the world

The 13th generation Kuramoto, Koichi Saura, took over the traditional family business in 2001. The URAKASUMI brewery has been providing effective support for the region for generations - in good as in bad times. This was also the case after the devastating earthquake and tsunami disaster on March 11, 2011, which wiped out many lives and destroyed numerous towns on the long coast in northeastern Japan. URAKASUMI immediately provided water reserves for the neighborhood and had hot sake distributed on the cold days - regardless of their own damage.

"The two thousand year old sake culture out into the world" is the new motto of the 13th generation Kuramoto. Koichi Saura volunteered early on to convey the sake culture abroad and to set up a system for it. However, he had to recognize that the European culinary culture is very different from the Japanese and that sake is not so easily and quickly accepted by the Europeans. In the meantime, however, the sake section set up on his initiative at the International Wine Challenge, one of the most important wine competitions in the world, as well as regular sake seminars like at the Japanese Cultural Center in Paris and at WSET (Wine & Spirit Education Trust) in London help to increase the number of rice wine connoisseurs and lovers in Europe.