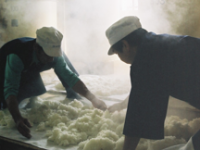 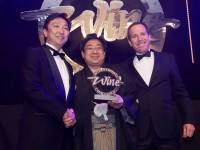 The brewery was founded in 1892 in Tendo city of Yamagata. Situated in the Yamagata Basin and surrounded by high mountains, Tendo city can be very hot (+35 ℃) in summer and harsh in winter with more than one meter of snow.

Their Sake typically has a delightful floral aroma, at the same time it has a clear structure. Imagining their brewing season in the deep snow of northern Japan, the purity of Dewazakura’s sake reminds us of the local folks’ admiration for the warm spring.

In their wooden architecture building above 100 years old, Dewazakura brews sake in small batches in a traditional hand brewing method with the lead of a Toji (Master Brewer).

The current Toji, Mr. Shinichi Sato is in his 70’s and has a well-trained body from the demanding brewing work. Under his proven experience and leadership in artisanal sake brewing, Dewazakura is providing a supreme taste in sake, that received the Champion Sake award, the highest prize at IWC (International Wine Challenge).

The brewery appreciates the traditional practices in brewing, at the same time they invest in latest machinery such as their own rice polishing machines, pasteurizer and deoxidizer equipment. Their continuous efforts of pursuing the best quality in sake is noticeable right away when we take a sip of their sake.

Dewazakura defined Ginjo Style back in the 80’s – still a leader today.

Dewazakura was among the first ones to establish Ginjo style sake already in the 80's, when even the word "Ginjo" was not yet well known. It has been 40 years since the release of their signature product DEWAZAKURA “Kirschblüte" ("Oka Ginjo" in Japanese).

DEWAZAKURA “Kirschblüte” was marked as top Ginjo Sake at Annual Japan Sake Awards for 12 consecutive years. Still today their achievement is recognized and this product is a leading Ginjo sake in Japan. This sake is often used in sake sommelier trainings as a great example of Ginjo style sake. This sake is definately recommendable when you like to experience the Ginjo style.

They are also a pioneer in brewing sake with a distinct "local" concept. For example, Dewazakura "Blüte des Nordens" Junmai Ginjo is brewed from the local rice variety Dewa San San, local variety of Koji Oryzae Yamagata, and the local Yamagata yeast. While an expressive and tropical fruity aroma is common in Ginjo style sake, Dewazakura's sake presents a harmonic floral bouquet, which makes their sake unique and charming.

Their Award-Winning Sake to be enjoyed all over the world

The president of Dewazakura is currently the 4th generation of Nakano family, Mr Masumi Nakano. Under the aim of "making Ginjo a familiar word worldwide”, he has built a presence worldwide. Today the brewery exports to about 30 countries. Mr. Nakano has been a representative in Japan Sake and Shochu Makers Association and is currently the chairman of the local Sake Brewers’ Association of Yamagata prefecture.

The brewery has also received numerous well-known awards in Japan and internationally. DEWAZAKURA “Ichiro” was awarded as Champion Sake in the International Wine Challenge (IWC) in 2008.
In IWC 2016, the brewery received the Champion Sake again as well as the Sake Brewer of the Decade awards.